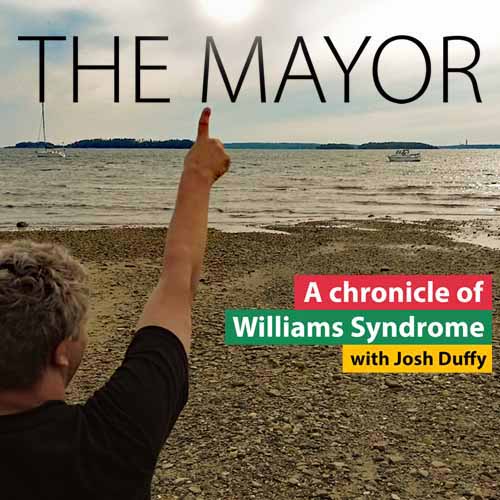 A Williams syndrome documentary about Josh Duffy from Brunswick Maine. His trials and tribulations, success, affinity for music and his unique abilities.

This documentary was produced and directed by Jake Jakubowski and is a film about Josh Duffy, a 42 year old man with a unique rare genetic disorder called Williams syndrome. Everybody loves Josh, his personality shines in social situations, but most people that know him, don't really know him. He has lead an incredible life, from winning a gold metal at the Special Olympics, to remembering stories he heard 20 years prior. He is a shinning light to everyone that he comes in contact with. He has a tremendous amount of empathy and loves to give hugs.

Even though Josh has struggled with both mental and physical limitation his entire life, he doesn't let that stop him from spreading his love!

Learn more about Williams syndrome and watch the trailer. If you like the trailer, you can watch the full documentary, free on youTube.

Josh Duffy is the subject of the documentary called THE MAYOR: A Chronicle of Williams Syndrome, with Josh Duffy. In this Documentary through interviews and footage, we get to see what it's like living with Williams syndrome, and the effect that Josh has had on everyone that he meets.

As quoted by everyone that he meets, Josh Duffy is an amazing, heart warming, empathetic human being. In this day and age where there is so much turmoil in the world, being around josh and his love, is a breath of fresh air.

Josh was born in California, and at around the age of seven, moved to Pagosa Springs Colorado, where he made quite the impact.

During his time in Colorado, he graduated High School and won a gold metal in the Special Olympics in the category, Down High Slalom.

By his own account, living with Williams syndrome is tough, because he always feels alone. He has so much love to give and sometimes that love isn't reciprocated. Despite feeling alone, Josh is always ready to give a huge hug and love everyone!

Jake Jakubowski, under the name DMJ Productions, directs and produces independent documentaries and releases them for free on his youtube channel. No money is made from these documentaries.

Jake Jakubowski is the Producer and Director the the documentary THE MAYOR: A Chronicle of Williams syndrome, with Josh Duffy This is his first film.

Josh and Jake are best friends. Although Josh has a disability, it doesn't stop them from hanging out all the time and being best buds.

Jake has been a video editor since 1991, when he was in High School. He has always wanted to do a documentary, but never had the subject matter, nor the financial means. In 2021 Josh's grandfather passed away, Jake recorded a short video of Josh spreading his Grandpa's ashes over a bridge... And suddenly it clicked!! Why not do a video about Josh? The rest is they say, history. Josh and Jake started their venture on a documentary about his life and living with Williams syndrome.

Jake is looking forward to his next couple documentaries that are already in the works.

First discovered by John C.P. Williams of New Zealand in 1961. Williams syndrome, also known as Williams-Burnham syndrome, is a result of a deletion of a specific region on chromosome number seven, containing 26 to 28 genes. Approximately one in 10,000 births are affected by this spontaneous gene deletion.

Williams is associated with both mental and physical traits, including extroverted personalities, a broad forehead, heart defects, gastrointestinal issues, sensitivity to light and sound and, among others, an affinity for music.

More recently, there have been studies to indicate that domestic dogs may have the same genetic marker as people with Williams syndrome.

MONIQUE UDELL - Animal Behaviorist and Assistant Professor Oregon State University: Dogs will come and greet a person and greet them again and continue to greet them. Whether or not that person is reciprocating that affection and in some cases, they'll be just as enthusiastic with strangers as they are with their own owners.

And so what we found is that actually corresponds to some of these genetic regions. This is really exciting because it suggests that there might be this common mechanism between some of these developmental delays that we've seen in humans, especially with Williams-Burnham syndrome and it's incredibly pro-social behavior that makes dogs unique.

According to a PBS NOVA special people with Williams syndrome may have the same level of the love hormone oxytocin as man's best friend does. Geneticists are suggesting the reason for the higher level of oxytocin is due to the same genetic mutations that occur in the dog genome. It pertains to three specific genes, which may explain why people with Williams syndrome are hyper sociable.

The documentary, 'The Mayor: A Chronicle of Williams Syndrome with Josh Duffy', is being produced by Jake Jakubowski, a Topsham resident and good friend of [Josh Duffy]. The title of 'mayor', Jakubowski said, refers to Duffy’s reputation of being a well known and sociable character around Brunswick. Read the full article